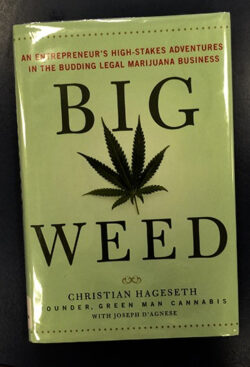 Don’t be intimidated by reading Big Weed by Christian Hageseth.

First, if you’ve been reading Scranton Page Turner for any length of time, you’ll know that I will not write a review of anything that I don’t find some redeeming value in.  Big Weed is a whole big bunch of fun. 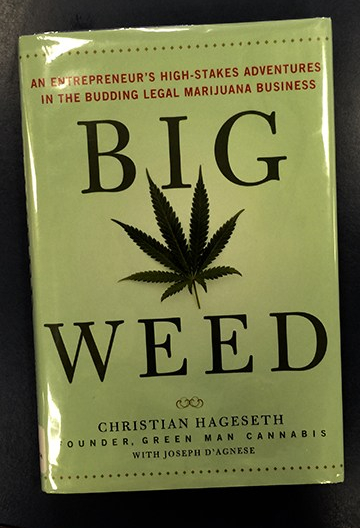 The book is quite a fascinating look at a REAL start-up business.  Start-up in the fact that the book takes place in Colorado, one of the first states in The United States to legalize medical marijuana. Christian Hageseth walks into this business after the 2008 financial crisis where he ran a successful real estate company.  After 2008, all went bust.  Mr Hageseth like many others suddenly found himself without a steady income.  However with his knowledge of running businesses and opening new ones he found himself in an enviable position.  He knew how to operate a start-up.

Because Big Weed is more than just a book that discusses marijuana, it can be read by ANYONE considering opening a start-up.  This book resonated deeply with me for a number of reasons.  First is Mr Hageseth’s attitude toward happiness in your career.  Countless times throughout the book, Mr Hageseth wrote:
I knew how to make money.
I knew how to chase down leads.
But did that make me happy?

What he was really saying is what my entire belief system on creating wealth is about:
Do what makes you happy and the money will follow.   I write another blog called Wisdom and Life and I have entire category based on this paradigm.  If you’re interested hop on over and read several columns:
Parental Pressure

There are only thirteen.  Don’t let the title of the category scare you away,  If you read a few, you’ll understand why I named it as I did.

Big Weed discusses the advantages of using marijuana for its medicinal properties. It can alleviate a whole host of side effects when going through chemo.  Marijuana has also been shown to help Parkinson patients.  Mr Hageseth discussed the benefits for Parkinson briefly here too.

Because marijuana use is still a federal crime, getting banks to take the money you receive from this business is  still a sisyphean task. Many people in the medical marijuana business have to resort to an all cash business and this to presents all kinds of obstacles.  But Mr Hageseth prevails and doesn’t give up.  Another reason Big Weed is an important book to read outside of the somewhat taboo topic. It shows that if you follow your dreams and continue to push through the obstacles put in your way, you too can prevail.

Marijuana is still a federal crime and because of this, Those who start a medical marijuana business have a difficult time finding banks who will take their money.  YOU try running a strictly cash business and see how far you get.  Not only is carrying the amount of cash that marijuana produces dangerous, it is sends up red flags to others who operate legitimate businesses.  These are some of the things that Mr. Hageseth deals with on a daily basis.