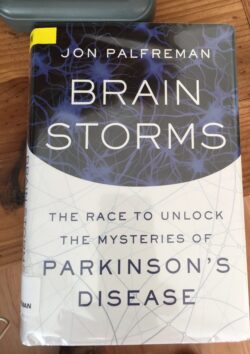 Brainstorms:
The Race to Unlock
the Mysteries of Parkinson’s Disease

Parkinson’s Disease is debilitating in a number of ways:
1.  Parkinson’s is progressive in that it continues its advance.
2. There is no known cure yet.

Brain Storms: The Race to Unlock The Mysteries… is an excellent book to read for caregivers and family and friends of those with the disease.  Told chronologically, the book begins with the namesake, James Parkinson discovering that he had tremors when walking.  In 1817 James Parkinson wrote:

Essay on the Shaking Palsy in which he described the first symptoms he discovered that he himself experienced.  A slight tremor in some part of his body, sometimes in the head, but most likely in the hands or arms (page 6.)  This was the first known diagnosis of he yet to be named illness.  The essay hadn’t received a wide audience and were it not for another doctor, the Frenchman Jean-Martin Charcot, Parkinson’s Disease may well have not been known for sometime later.  Charcot discovered Parkinson’s essay in the 1860s.  So we can thank Jean-Martin Charcot for expanding the study of and naming this illness after its “first known” patient.

This book is packed with valuable information and I highly recommend it to caregivers, family and friends of Parkinson’s patients.  Brainstorms provides a roadmap for what to expect for the person who has the illness.  It also gives hope to patients, giving coping mechanisms to deal with the progressive nature of the disease.

The author, Jon Palfreman discovered he also has Parkinson’s as he researched the book.  Having someone so close to the disease be the author helped move Brainstorms forward.  Palfreman is able to write about this topic with insight that someone who doesn’t have the illness would.

There is so much I want to discuss about this book but I don’t want to provide a reason NOT to read it.  I read the book myself, for a number of reasons:
First:
Someone I know well has Parkinson’s Disease and I want to be prepared for what COULD happen.

Second:
My taste in books runs the gamut from SF/F to History to Biography to Science to Spirituality.

You get the picture:

I learned so much from reading Brainstorms:
–Dancing helps alleviate symptoms.
–Any exercise helps.

People, Dr Fay Horse who runs a human performance lab in Oregon is very interested in turning. People, she says, turn about a thousand times a day. Turning is harder than walking…People with Parkinson fall a lot more often when they are turning than when they are walking.  That’s because turning involves shifting your weight by just the right amount at the same time as you perform an asymmetrical leg motion. People with Parkinson disease end up with too much weight on the wrong leg and then they fall.

Having this knowledge as someone who is close to the illness can be a double edged sword.  It’s welcoming to know what’s coming, but also a bit frightening if you’re not prepared to accept it; which is why Brainstorms MIGHT not be a book patients should read.  The book DOES provide insight and it does give hope if you can find it.  Even as someone who ONLY knows someone with the progressive illness I found the book a bit scary.  In the end however, I’m glad I read it.  I think most who read Brainstorms will feel the same.

Book TV has a fascinating discussion about this book:
Brainstorms on BookTV

Brainstorms: The Race to Unlock the Mysteries of Parkinson’s Disease

0Shares
0 0
No Comments on Brainstorms: The Race to Unlock the Mysteries of Parkinson’s DiseasePosted in Medical, Non Fiction By chrisPosted on February 23, 2016June 10, 2020