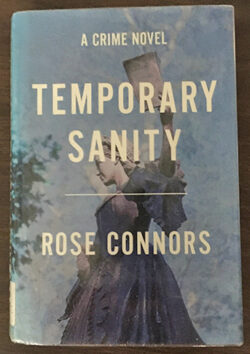 If there is one thing I enjoy about reading it’s having visited the settings of the books I’ve read.  Rose Connors writes about Sandwich in Cape Cod and she writes the setting so well that it almost becomes another character.  Ms Connors has written four books:Absolute Certainty published 2004Temporary Sanity  published 2007 Maximum Security published […]

Cuba Strait by Carsten Stroud is full of unexpected twists and turns.  This is the mark of a novelist at the top of his game.  I’ve enjoyed writers who write about Florida crime fiction since discovering Carl Hiaasen several years ago. Carsten Stroud is another writer to look at specifically Cuba Strait if you like southern […]

Raptor RedRobert T Bakker Robert Bakker, a contributor to the film Jurassic Park wrote Raptor Red in a style that initially  caught me by surprise but after settling into the narration, I found the style worked very well.  Raptor Red is the name of the dinosaur whose story is being told, oddly enough in the […]

Read More
No Comments on Archeology/AdventurePosted in Adventure, Mystery, Science By chrisPosted on May 18, 2016June 10, 2020

What draws me to a particular book?  That’s a challenging question to answer as I read so many books a year.  Science Fiction and Fantasy are still and I think always will be my favorite genre.  Magic Realism is an extremely close second.  Authors such as as Jonathan Carroll and Alice Hoffman fall into that category. […]

Read More
No Comments on Water FictionPosted in Crime, Fiction, Mystery By chrisPosted on February 11, 2014June 9, 2020

Harlan Coben Having read several books by Harlan Coben I can honestly say of all the books he has written that I’ve read, Tell No One is by far the single best book he has written.  I read that book in about two hours.  I simply could not put it down. A husband receives an […]

Read More
No Comments on Coben/CookPosted in Crime, Fiction, Mystery By chrisPosted on November 12, 2013June 9, 2020