My friend, Karen recently posted something  on Facebook that intrigued me:
I’m trying really hard to understand why some people don’t understand the meaning of respect or just good old fashioned courtesy. Maybe I’m asking or expecting too much. 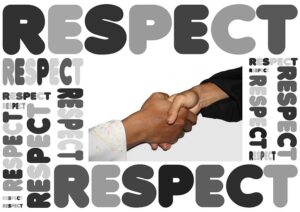 I’ve had a similar conversation with another friend of mine.  We have agreed that there has been a general decline in respect.  As I commented on Karen’s post:
I think we were raised at a different time. And some of us were taught to treat others like we want to be treated. Unfortunately not everyone shares that belief.

All we can do, Karen is continue to live our lives the way we were taught. The people who understand will ALWAYS be in our lives. The ones who don’t don’t matter anyway.

One of my favorite ex high school teachers, is a frequent library user.  After he retired, he subbed for awhile and he would come in and visit with me at the library.  Some of what he said went on with the classes he subbed for turned me red.  Openly swearing at those in authority, refusing to listen to teachers, continuing to do what they’d been told to stop doing.  I can’t imagine not respecting those in authority.  Not for fear of retribution, simply because I wasn’t raised any other way.  I’m not sure who should be held responsible because at some point, children and young adults eventually have to assume accountability for themselves.

I sometimes find myself jokingly saying:
Kids these days.

I’ve said as much to that ex teacher a few times, attempting to lighten the mood.  But it isn’t just kids who don’t understand respect.  Even some adults have a challenging time understanding common courtesy as can be seen from my friend, Karen’s statement on Facebook.

I seldom tread into the political realm because it is fraught with trap doors and someone will find something to be angry with.  However even in politics, things have become us against them.  There is no respect shown to either side.  It’s all about me, me, me.  What’s in it for me?

I have a friend who has her own business and she sees the same thing.  People not treating her with the respect she deserves.  She’s become discriminating when it comes to picking up new clients.  She can afford to do so now.  It’s a shame that there are some of us see a lack of respect.  Even in my own fledgling social media business, I’ve seen it.  Not so much with my own clients because I’m able to choose the people I associate with.  This is not my main source of creating abundance.  When I’m out with my clients I’ve seen others not treated with the respect they’ve earned.  Is this an epidemic that is only going to grow exponentially, or can we find a way to curb this?  I’m afraid to know the answer.

There is always going to be those who show a lack of respect.  What are some of the steps we can take to ensure we aren’t hurt by those who attempt to disrespect us?