The truly wise person kneels at the feet of all creatures and is not afraid to endure the mockery of others. 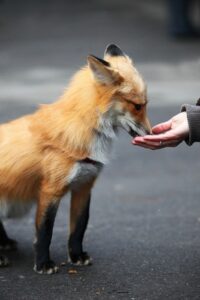 The above quote Mechtild of Magdeburg resonated with me because I seem to have an animal magnetism.  Animals of all kind seem to be attracted to me.  The picture above is an actual representation of something that happened to me a few years ago.  For about a month in the early morning while leaving for work, a family of fox (two kits and two adults) would come of the woods near my condo and watch me as I stepped in my car.

After this happened for about two weeks, one of the kits came out of the woods.  I bent down, held out my hand and the kit actually sniffed at my outstretched hand, looked up at me then raced back with his family.

I think we were both shocked at the brazenness of the small animal.  Animals have never really been frightened by me.

Another time I was out walking in Killingworth, Connecticut near Chatfield Hollow, when a black bear crossed my path. 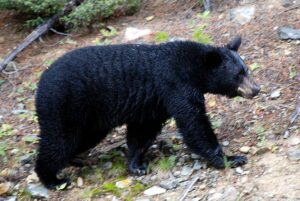 The bear simply looked at me and ambled on its way.  I’ve often wondered what animals see in me not to give chase, not to do harm to me.  I’m certainly not going to test the delicate balance I seem to have with their wild nature.  I find it fascinating however that animals see in me some kindred spirit?  Someone who really does live the quote:
Live and let live.

Of the two recent experiences I’ve had with nature, the black bear crossing my path left me the most unsettled.  The bear could very well have done monumental bodily harm to me and no one would have known seeing as I was out walking alone…

I’ve experienced other encounters with nature that has left me unscathed as well.  The incidents with the bear and the fox are just my most recent and most startling with wild nature.

Dogs that normally are aggressive with other people are almost ninety percent of the time docile and completely friendly with me.  In fact, a few months ago I was out walking with a friend of mine (Not my usual walking companion.)  We walked passed a barking dog and my friend panicked.  He crossed the street and wouldn’t return.  The dog kept barking and ran toward me.  As the animal drew closer, his whole demeanor changed.  It was almost as if the dog recognized me as a friend.  His tail began to wag and his barks became less aggressive and by the time he reached me he flopped down exposing his belly and was bucking up and down expecting me to reach down and pet him.

Meanwhile, the dog’s owner had exited the house and when she saw what was happening, she was dumbstruck.  She found her voice and finally said:
I never saw Beau act like that before.  I half expected to drag him off of you.  The way he raced after you I thought sure he would continue barking.  Beau has always been aggressive when anyone comes near our house.  He’s never actually bitten anyone, just bares his teeth and incessantly barks at anyone or anything that moves.  It’s why I have an electric fence around around our yard.

I could only shrug my shoulders.  I couldn’t explain it.  Well, I COULD, but she would probably look at me cross eyed and mumble to herself.

I don’t know what it is that makes animals that SHOULD be aggressive toward most people create a completely opposite attitude toward me.  Maybe they sense the shamanic wolf in me?

As I said previously, I certainly don’t go out of my way to test this.  These events I’ve experienced are spontaneous and I’m always surprised by them.

As I’m writing this now I just flashed on another experience I had with a German Shepherd in my maternal grandparent’s neighborhood on Graham Terrace in Lisbon, Connecticut. 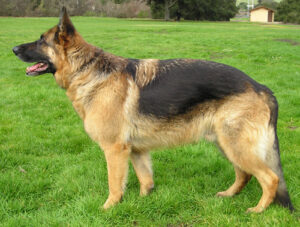 I spent quite a bit of time in Lisbon when I was young, mostly from the age of six to about fourteen.

There was a German Shepherd in the neighborhood that was aggressive with all the children. Everyone that is except myself. This dog was kept fenced in.

I walked right up to the fence ALL the time, much to the shock of my friends, The German would race over to me, jump up and lick my face.  When my other friends approached the fence, the dog would become agitated and start growling from across the fenced in yard.

So even as a young boy, most animals saw in my not a threat, not someone to be aggressive with, not someone to be afraid of.  Rather, they saw in me a friend, a companion.  I was and am still far from afraid to endure mockery from those who believe I’m putting myself at risk.

I still wonder at the events with the wildness of nature and why nature doesn’t see me as a threat, as a danger to be dealt with.

Anyone else have similar tales to tell?
I’d love to hear them in the comments below.

One thought on “Kneeling at the Feet of All Creatures”