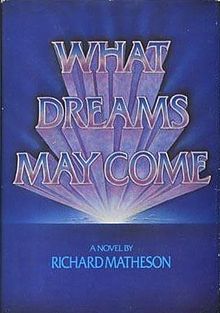 What Dreams May Come
Richard Matheson

While my choice in literature may not always resonate with my audience, I won’t steer you wrong.  You’ll always come away with at least one Ah-ha moment in every book I discuss.

All three of these books have a subject that I’m a firm believer in.  The first book on the list:

I read Matheson’s What Dreams May Come originally in the early 1990s and the book had such an impact on me that it changed my entire perspective on Life and Death.  There have not been too many books that have had such life altering experiences for me.  What Dreams May Come is on a very short list of such books.  This book should be on EVERYONE’S shortlist of books to read in their lifetime.

A movie of the same name based on the book is available on DVD and though I don’t usually recommend both book and movie, this is that rare exception where both can be viewed separately and neither one takes away anything from the other.

The book is based on years of research by the author.  In fact so much went into this book that there is an extensive bibliography in the back of What Dreams May Come. Matheson says in his foreword that he doesn’t expect us as readers to read every book that he used, however he DOES say that if we chose to we’d come away with a new perspective just as I did.

The book begins with a knock on the door of someone.  Chris Neilson has passed and he has been communicating with a medium.  It is said medium who knocks on Chris’s brother’s door and insists on giving him the notes from said conversations.

This is where the book begins. Through this manuscript, Chris attempts to reach out to his brother, doing his best to explain that there is indeed a survival after death, that the soul does carry on, that at some point, we can choose to return to earthly bodies. Yes!  I’m referring to reincarnation.

Ostensibly, in What Dreams May Come is where I first saw this topic and really delved deeply into it.  I’m half way through a second reading of this book and it still carries a huge weight, it still resonates powerfully with me.  There aren’t many books that I re-read that still weigh as heavily on me a second time.

What Dreams May Come is a MUST read!
It is a book that MUST be read by ALL of humankind.

Old Souls
Tom Shroder, the author of this book accompanied researcher and scientist, Dr Ian Stevenson across the globe to investigate young children’s claims of recalling past lives.  The evidence put forth in the book is compelling enough to have the author, Mr Shroder go from skeptic to believer after returning from the scientific journey.  Quite an amazing book.  I hesitate to give any of the stories away only to say that the bulk of the book takes place in India.  There are cases upon cases in this book where children who are of such a young age three to six, years old who have recalled earlier lives with other families.  Dr Stevenson, accompanied at all times by the author have tracked down the child’s previous family when the child claims to have lived another life.  Countless times the children are able to recognize family without any aid or assistance from any of the previous family.

Soul Survivor
Plane on fire! Little man can’t get out! These are the words of James Leininger who a bit after his second birthday started having nightmares and not just just bad dreams but night terrors where, the young boy would waken night after night screaming that phrase and others.  This went one for months with no resolution.  When little James provides details to aircraft that he should have absolutely no knowledge of, his parents become first concerned then that concern leads to curiosity.