Alright:
So I’m cheating by republishing this column for “Saints” Monday:
Saint Christopher is called upon today. 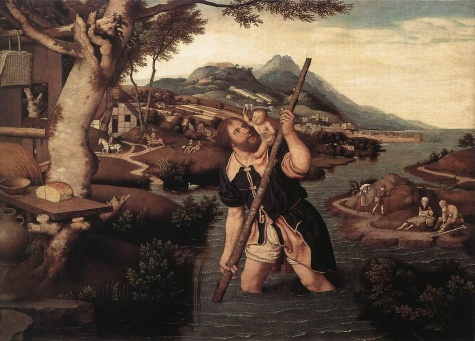 Saint Christopher who I like to say I was named after is said to have carried the Baby Jesus across a river.  As Christopher, who is said to be a man of great strength carried the Christ Child across the river, it is told that he became weakened as Christ became heavier.  When questioned by Christopher why the child grew heavier the longer was carried, the child said:
It is because I carry the world’s sins upon my shoulders.

Maybe it’s just me, but when I see the word RIVER used in Biblical terms, my thoughts IMMEDIATELY focus on The River Styx.  In this context, someone like the Christ Child would DEFINITELY need help crossing THAT river and who better to protect someone than the Patron Saint of Travellers, as Christopher came to be known later.  The story goes that once Christ was safely delivered to the River’s other side, Christopher’s staff was turned into a living tree.

A living tree?  You mean like the Tree of Life?

Christopher was a widely popular saint, and was especially revered by mariners, ferrymen, and travellers.  Ahh.  There’s that word:
Ferryman.  That conjures up The River Styx Story as well.

And what if Saint Christopher is the mythical ferryman that transports others across the River Styx?

I’m NOT in the LEAST attempting to be blasphemous here.  I’m primarily showing how a given story that APPEARS to be related to Myth can be fit into Biblical terms.  And this is yet again a CLEAR example that EVERYTHING is connected.

Do you know any Biblical stories that have roots in mythology?  I’d LOVE to hear from you in the comments below.

Be Happy!  Be Well!  Be Positive!
Blessings to you.
—
Christopher