There is a theory that humanity developed from space, that we were placed here by a benevolent race from outside this universe.  There have been many movies and television series that touched on this theory.  In the Star trek The Next Generation episode called The Chase in one of the final scenes, we see a hologram of a humanoid explaining how all races are tied together:
Star Trek Next Generation The Chase Monologue

One of the plot lines in Ridley Scott’s Prometheus posits the same theory that we all have one common ancestor and that ancestor is tied to a seeding of the planets from another world.

At the 40 second mark of The Prometheus Trailer, we hear someone discuss a pictogram that was discovered in civilizations separated by centuries. 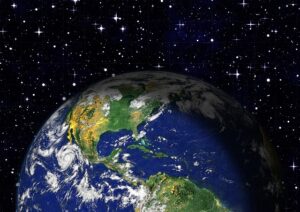 The February 6 release of Jupiter Ascending is the latest movie to proffer this theory.  Not that these examples necessarily prove the theory, however knowing that there are many who promote this and seeing it show up so frequently certainly relays the fact that there is something going on.  As Law of Attraction states:
The more something shows up in our reality, the clearer it becomes that we should pay attention.

Maybe that’s why I walked into The Madison Coffee Shop a few months ago and saw my friend, Pete Onofrio.  As we waited for our lunches we started a conversation about a variety of topics we are both passionate about.  One of the topics Pete brought up was the theory that we originated from the stars.  The funny thing about my showing up at The Coffee Shop that afternoon was that it wasn’t my initial intention.  I planned on going somewhere else.  Obviously the Divine had other plans.

That’s what usually happens when I run into Pete.  I never really plan on doing The Coffee Shop when I see Pete there.  The Divine knows when he is there and it ALWAYS diverts my thought process.  We’ve talked about this before as well, how we end up seeing each other and it’s totally serendipitous.

So; the theory that we originated from the stars, how does one balance this with a belief in God?  If we DID originate from another species, who created THAT species?  I’ve touched on this topic previously in a column called Alien Life.  Like the Chicken and the Egg, which came first?  Someone had to create the first life.  As The Bible says:
And God saw every thing that he had made, and, behold, it was very good. And the evening and the morning were the sixth day.

Who is to say that God didn’t seed the multiverse?  What if God was the benevolent being who put is DNA everywhere?