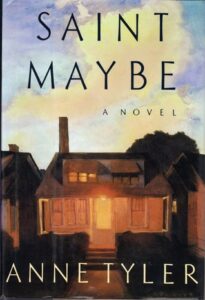 Alright!  Alright!
So I’m cheating with this “Saints” Monday theme.

My first Saints column a few weeks ago about Saint Anthony produced some thoughts about the word “saint” which lead to Anne Tyler’s Saint Maybe.  I believe this was my introduction to Ms Tyler.  What an introduction indeed.  Everything my worldview consists of is wrapped up in this book:
–Forgiveness
–Second Chances
–A welcoming spiritual community

–A church with the name:
Church of Second Chances.

The story centers on Ian who has a suspicion that his older brother Danny’s wife, Lucy is having an affair.  When Ian discusses the possibility with Danny, Danny commits suicide.

Now wracked with guilt, Ian becomes despondant himself.  He seeks support from a Reverend Emmett at the Church of Second Chances.  I just love the name.  Because it is EXACTLY how I feel:
That everyone deserves a second chance.

I believe this is why Saint Maybe still resonates with me even though over twenty years has passed since I read the book.

Saint Maybe was engaging, powerfully written and I felt as I was inside Ian’s thoughts.  That’s the mark of a talented writer.  Anne Tyler is someone who I highly recommend.  If you haven’t read Saint Maybe, I think it’s a good place to start.  Not just because I started there but if you are a follower of this blog I’d like to believe we are on the same page so to speak.

If you believe this:
Isn’t that one of the underlying reasons Jesus died on the Cross?
To give all of humanity a second chance?

If Jesus could give us another opportunity to redeem ourselves than don’t you think its a bit petty of us who hold onto a grudge, hold onto a hurt, hold onto anger?

I certainly understand when someone has wronged us that we want to lash out as we were lashed out at, but don’t you see that when you do so, you’re only adding to the negative energy around you.  Seems to me, the better thing to do is to throw positive.  A negative simply has no means of surviving when positive is released. I’ve said it here before:
Let’s say darkness is negative and light is positive.  What happens when light is turned on darkness?  The dark disappears, correct?

Well the same can happen when you throw positive energy on negative energy.  The negative simply dissipates.

It can take some time to understand this and put into practice.  However, if you want to live a joyful life I found the only way to do so is to practice forgiveness, practice giving second chances every day.  I wouldn’t want to live any other way.  I know people who can’t do so and I’m grateful everyday that I’m not one of them anymore.

The lesson was challenging for me to learn.  It took me almost half of my latest incarnation to understand the only way to change someone else was to change myself.  And now that I learned that valuable lesson, it opened up my entire life to the knowledge that loving someone else requires second chances and forgiveness.