Traveling Among The Stars

Friday, February 27 2015:
A sad day for me as I discovered that Spock truly wasn’t returning.  We can [easyazon_link identifier=”B001XUNQ4S” locale=”US” tag=”80010c-20″]Search For Spock[/easyazon_link] all we want, but he won’t be found.  Not this time.  For he is now truly traveling among the stars.  I’ve been a huge fan of the the entire Star Trek universe since I first discovered the original series in the early 1970s.  I think I most connected with Leonard Nimoy’s portrayal of Spock over any other character on the original series. 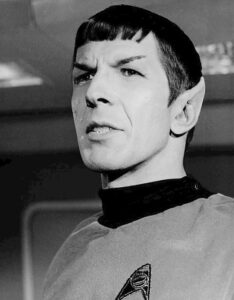 Spock was the serious character in a somewhat otherwise sometimes campy series.  I believe he was the heart and conscience that held the crew together.

–He was the logical one.
–He thought through the challenges that arose.

Although Leonard Nimoy played other roles during his lifetime, it was with Spock that he became an indelible fixture in the hearts and minds of everyone.  Even people who:

A.  Never watched Star Trek
B.  Never knew anything about the series

knew who Spock was.  In fact I’d go so far as to say that the character of Spock became even more ubiquitous than Captain Kirk.  Maybe I’m thinking so because I felt a strong connection to Spock.  If you look at the breadth of his career, I believe you’ll find that he appeared in more Star Treks (movies and series after the original series ended than any other original series character.)   He even appeared outside the Star Trek Universe as Spock.  How many other fictional television characters have played themselves so frequently after their series ended?  Why did I feel that connection to Spock?

I think because even though he was supposed to be emotionless, his feelings surfaced frequently throughout the series.  His raised eyebrows after something amusing happened wouldn’t have occurred if he wasn’t half human.  Spock struggled consistently with his humanity as we all do.  Another reason I connected with his character.
We all have challenges.
We all have our struggles.

It may have been the reason behind creating the character of Spock in the first place.  Roddenberry was ahead of the curve in so many ways.  He portrayed the first interracial kiss for one.  And one of the reasons Science Fiction (SF) is my favorite genre is that many of the stories are simply allegories masked in the SF genre.

To show a half alien half human character struggle with human emotions is Roddenberry’s mask.  Spock was ahead of the curve as well and he stayed ahead by staying the most relevant character from the original series.