Mother and daughter passed within a day of each other.  Some may say Carrie Fisher’s mom, Debbie Reynolds suffered a stroke because of the stress of losing her daughter.  That’s an explanation people will be able to accept.  But there’s another esoteric interpretation of the events that happened at the end of December.  It’s one that I prescribe to:
Predestination 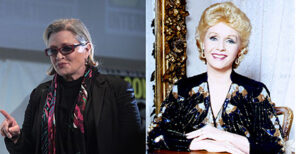 Transition Hall is where we go to choose our next incarnation.  I understand that some of my worldview may sound a bit esoteric.  However, for someone steeped in the paradigm, it is all simply one piece to the puzzle.

In Transition Hall, we choose not only the life we will lead but we also sign a contract that states all that will happen during our latest incarnation, from when we will incarnate and into what kind of life we will live to when we will transition once more back to our soul groups.

So what I’m saying here is that I believe that predestination tells us that there are certain aspects of our lives that simply can NOT be altered by the contract that we sign:
Our incarnation date and out transition date are two such things that can’t change.

Unless we take matters into our own hands with our transition.  If we do that then we don’t return to our soul group.  That will cause a one way ticket back to humanity.  This is not a punishment as I’ve written here countless times over.  It is simply a spiritual law, a karmic law.

Perhaps during Carrie Fisher’s and Debbie Reynolds’ time in transition hall, they decided to pass together.  They obviously had a contentious relationship during their latest incarnation; another thing they chose when they incarnated.  They seem to have finally resolved their differences however.  Because they became family again, only to have their time cut short, perhaps, Debbie Reynolds DID need to be with Carrie and maybe that was in the contract Reynolds signed before she incarnated:
That if they were able to set aside their differences, Reynolds would transition with her daughter.

I understand this is a delicate topic and I’m in no way making light of this tragic event.  I’m simply giving my own explanation for why I THINK mother and daughter may have passed together.  An esoteric reason I know.  Because I’m steeped in the paradigm I’m in, I find my thoughts naturally going in that direction.  May Carrie Fisher and Debbie Reynolds find peace in their passing and we can celebrate their lives.