Souls Made Us Human

Within the last 100,000 years, we find two clear signs of spiritual consciousness and communication.  These are burial practices and ritualistic art, as found in carved totems and rock drawings.  There is no anthropological evidence that these practices existed on earth before Neanderthal peoples.  Souls eventually made us human, not the reverse. 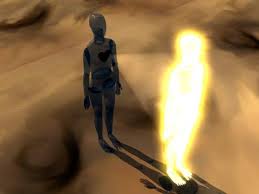 I haven’t discussed Journey of Souls recently but the book is still very important to me as it is one of the few books that shifted my worldview.  I went through my Google Drive where I keep a file of all three of my blogs.  I also write notes for upcoming blogs.  Last week, I cleaned out old files and came across the above quote.  I must have written it down as I read the book.  Clearly I don’t recall when I did so.  I’m glad I discovered the passage though as it gave me an old favorite to discuss again.

Transitioning and what happens to us when we are in the light.

I believe our souls existed even when we were not aware of them.  It’s not something that suddenly appeared.  Only our recognition became apparent.  I think God/Consciousness/The Divine watched from above and when the time came, HE simply pushed a button, released HIS hand from some magic place, spread his message to the world that HE is here for us.

Our souls always existed.  We just needed to be made aware of them.  Once that message became known we then began our spiritual journey.  It is well known that Neanderthal became the first to bury their dead.

It took an awakening.

It took a certain type of being to understand the Divine.  I believe God saw in that subspecies, a spark that would ignite our understanding.  Souls exist in ALL living creatures.  It is only humanity that has developed to a degree that we understand the Divine.  I completely understand there are some who may shout:
Heretic. Sacrilege.  at that last statement.  That’s fine.  As I have said here too many times to count:
Take me or leave me. I no longer worry what others think.

I’d rather think outside the box.  It is after all our differences that make us human.

There is SOME evidence that Balinese Long-Tailed Monkeys bury their dead.  Even if it is eventually discovered that the these monkeys do NOT bury their dead, they DO seem to spend an inordinate amount of time at the gravestones of their compatriots, a clear example at LEAST to me that they MAY be developing an understanding of THEIR souls or at least show growth in mourning their dead.  The next natural progression MAY very well be a crude burial ceremony.

I like the fact that the above passage ends with:
Souls eventually made us human, not the reverse.  For it brings to mind that other quote I’m so fond of:
We are spiritual beings having a human experience.